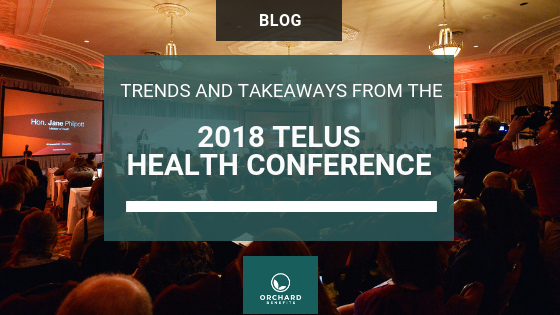 Trends And Takeaways From The 2018 TELUS Health Conference

Private insurance stakeholders have consistently rated the TELUS Health Annual Conference as the industry-leading source for information on trends across the health benefits ecosystem. The 2018 TELUS Health program provided us with leading intelligence on Canadian private drug and benefit plan data and trends.

I was fortunate to have been among the top benefit consultants and group insurers at this year’s conference. Here’s an overview on the top trends I observed.

The Early Impact of OHIP+

The surprising figure that came right out of the gate was that since Ontario launched the youth pharmacare program on January 1st of this year, the number of drug claims for those under the age of 25 has been slashed in half compared to Q1 of 2017. With a significant decrease in claims, it translated into an average of 4% savings for private drug plans. However, it’s still limited with regards to the 4,400 drugs covered under OHIP+ vs. the 10,000 that can be found in a benefits plan.

TELUS also found within their research that generic drugs represent 63% of all drug claims, which has been more or less the same since 2015, compared to their U.S. counterpart, which boasts upwards of 75-80% of utilization rates.

While a very small percentage of plan members may require a brand drug for clinical reasons, the vast majority can be prescribed generics. And with plan sponsors facing cost pressures, and OHIP+ only covering generic drugs, it is more and more likely employers will be switching to mandatory generic drugs.

Now in some cases, the generic substitution isn’t good enough. A prime example of this would be how OHIP+ is only covering generic birth control and many people 25 and under are willing to pay the difference out of pocket to get the brand name. So if an employee or plan member wants the brand name and cannot prove that they medically need it, they have to pay the difference themselves.

The rising cost of specialty drugs

Specialty drugs are defined by how they help target specific, complex and chronic conditions such as, rheumatoid arthritis, cancer, hepatitis C, and multiple sclerosis. These are among the biggest drivers of the cost spike for drug plans, which can skyrocket into the hundreds of thousands of dollars per plan member.

One area that really stood out was how the surge in diabetes drugs led to the second highest area of spending for private drug plans. The data has shown us that a significant number of plan members could have started treatment with lower-cost generic drugs, instead of starting treatment with a second-line therapy, which can run annual costs upwards of $2,000.

While it used to be left up to the client and advisor to decide what will be included in their plans, we’ve seen a shift where mandatory substitution is implemented so it can actually be sustainable as costs continue to rise.

Veteran Affairs Canada recently implemented a new reimbursement policy for cannabis for medical purposes as a result of more physicians and health care practitioners authorizing cannabis for medical purposes. Veteran Affairs Canada has received positive feedback from Veterans and their advocates who report that Cannabis helps them with their health problems, as validated by the growing numbers in the chart below.

When medical cannabis is legalized nationally, we could see an 11% decline in overall Rx drug usage, which equates to an estimated $4.4 billion in reduced Rx spending.

While TELUS Health will publish their full report in summer of 2018, this highlights some of the top areas of conversation stemming from this year’s conference.

Contact us today to learn more about how IPFS can help you with your benefits plan.

The Art Of Structuring Your Benefits Coverage In 2022