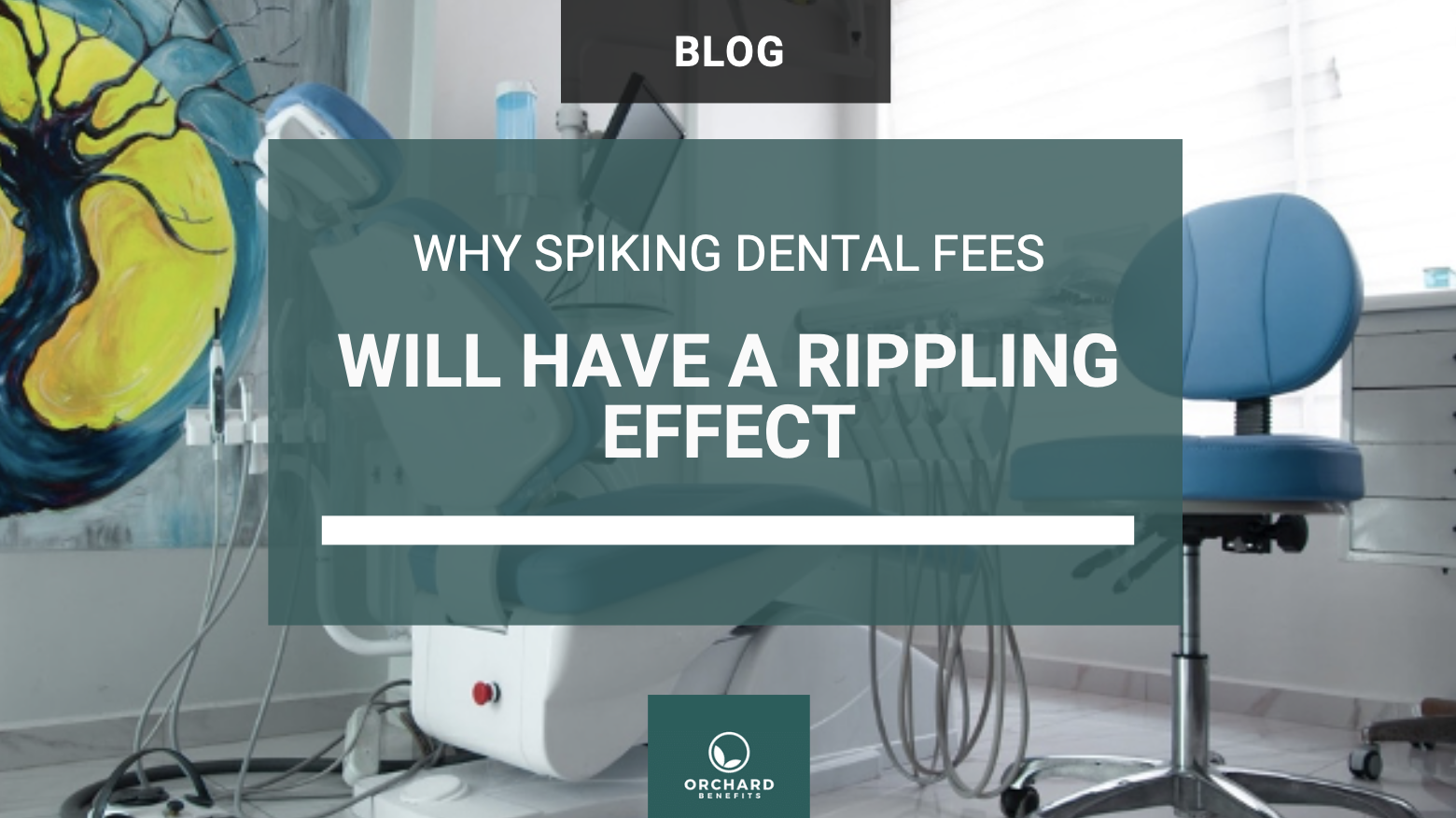 Why Spiking Dental Fees Will Have a Rippling Effect

It is common for dental fee guides to increase over time.

Based on data from the Canadian Life and Health Insurance Association, the total amount spent on dental benefits by group or individual insurance plans in Canada has gradually increased from $1.5 billion in 1990 to $3 billion in 2000 to 7.9 billion in 2016.

But this year is seeing a substantial spike beyond the expected and steady increase in dental fees.

Prices are skyrocketing and everyone is beginning to feel the pinch.

Why are dental fees spiking?

This year’s severe dental fee guides increase can be attributed to many reasons. Among others, the additional cost of infection control and preventative measures that have been adopted by dental practices across the country in the face of COVID-19 and keeping up with the inflation may be at the root of such a spike. The costs of everyday dental supplies going up because clinics have been faced with higher fees, and lower revenue. Health and safety come at a cost, and someone is going to have to foot the bill for everything from masks, face shields, gowns, compensating employees with higher wages and air purifiers to help keep their offices free of contamination.

Of course, to a certain extent, it also comes down to the basic principle of supply and demand; increasing the utilization of such a benefit plan in each successive year subsequently increases its cost.

While the overall trend in Canada points to increasing demand for dental benefits plans, a recent report by the Toronto Foundation and Green Shield Canada found that the country has a meagre public investment in dental services versus other countries. The report also revealed that, more specifically, Ontario has the lowest public oral health spending compared to other provinces.

The report shed light on how the oral health situation in Toronto is worse than in other large health units. Between 2017 and 2018, more than 400,000 Torontonians claimed to go to the dentist only for emergency care or never, 257,000 reported going through their daily lives with persistent and untreated pain in their mouths, and 170,000 reported dissatisfactions with the appearance of their teeth.

Additionally, 35 percent of Toronto residents don’t have dental insurance. Of those, almost half decided against going to the dentist in 2017 and 2018 because they did not have the means to afford it.

The issue of dental health affordability particularly touches marginalized groups such as immigrant and racialized residents, seniors, those who have food insecurity, and those with precarious employment.

Gig workers are less likely to benefit from dental coverage

As a result of the pandemic and the shift to teleworking, an increasing number of people transitioned to the gig economy, which means filling contractual and temporary positions.

The absence of dental coverage coupled with increasing dental fees is enough to discourage these workers from taking care of their oral health–which is worrisome.

Being able to afford to go to the dentist is crucial for one’s overall health. Indeed, poor oral health is associated with higher risks of cavities and gum disease and diabetes, cancer, and heart disease. Moreover, further negative implications from tooth pain and overall poor oral health have been linked with depression and declining educational and work performance.

Unfortunately, those without dental insurance have been found to have worse oral and physical health.

With the pandemic further aggravating the dental condition of many, the importance of upkeeping one’s oral health is even more pronounced these days. According to a March 2021 dentistry report, 70 percent of dentists surveyed said they had seen an increasing number of patients coming in with involuntary teeth grinding and clenching due to more extensive build-ups of stress during the pandemic. These conditions can lead to teeth damage such as cracking and chipping and, in more severe cases, even result in having to get some teeth pulled out.

Dental health is essential, and coverage is a much-needed asset in benefits plans. But, with the skyrocketing costs of dental fees, how can startups afford to offer such dental plans to their workers?

How startups can contain dental costs

From educational sessions to incentivizing consumer-like behaviours from their employees, these are some ways employers can contain the cost of dental benefits.

Firstly, the educational sessions can be a way for employers to teach their staff about “dental codes on receipts, explaining scaling units and encouraging them to ask for better prices on services.”

Secondly, another option is to adjust the plan’s design to encourage them to make smarter decisions when it comes to their dental needs. As suggested in a Benefits Canada article, some examples of adjustments include:

Even though dental fee guides are spiking, dental coverage should remain a priority in benefits plans. If you’re looking for more insights on how to contain such costs, contact us, and we’ll be sure to give you the best expert advice that is tailormade to fit your business.